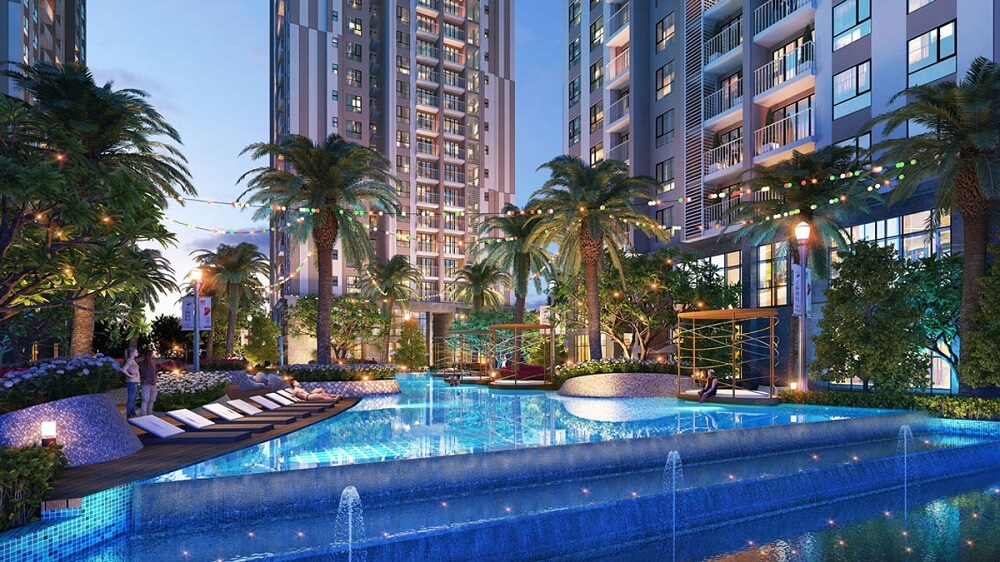 Gem Riverside
According to proposal to the AGM, Dat Xanh Real Estate Services and Construction JSC set a target revenue of VND5 trillion this year, up 73.66% from 2017. The company also expects its after tax profit will increase 42.23% over the previous year and reach 1,068 billion.
Dat Xanh’s target of strong growth in revenue and profit is based on a dozens real estate projects of large investment.
In which, Dat Xanh has implemented 16 direct investment projects namely residential project Sai Dong in Long Bien, Hanoi with a total investment capital of 824 billion and Nha Trang Petroleum Project with total investment capital up to VND8,818 billion in Cam Lam district, Khanh Hoa province.
Both projects are expected to be completed in 2020, of which the project in Cam Lam has an area of nearly 172 hectares, divided into 5,444 lots.
The remaining projects are located in different districts of Ho Chi Minh City, the largest project of which is 3,165 apartments of Gem Riverside in District 2 with a total area of 67,143 m2 and a total investment of VND 6.042 billion.
Many projects with total investment capital above VND 1,000 billion as Lux Riverview (769 apartments) in District 7, Gem Premium (2,630 apartments), Opal City (2,226 apartments), Opal Riverview (774 apartments), Pho Mo (1,143 apartments) in Thu Duc district and The Palm City (215 townhouses and villas) in District 9.
In addition to direct investment projects, Dat Xanh has also been implementing 22 co-investment projects, many of which are expected to be completed this year. Hoang Van Thu apartments project in Hoang Mai district, Hanoi with the total area of over 21,000 m2, 2Hanoi Homeland project with 1224 apartments built on the area of more than 17,000 m2.
Dat Xanh also cooperates to invest in some land lot projects as the urban area (UA) project along Tac river and Hoang Long urban area in Nha Trang, New urban area Nam Song in Khanh Hoa, three land projects in Lien Chieu district, Da Nang and two apartment and villa projects in Nam Tu Liem district, Hanoi.
In 2018, Dat Xanh plans to increase its charter capital from 3,031.9 billion dong to 3,850.5 billion dong in two phases.
In the first phase, 39,392,541 shares will be issued to pay 2017 dividends, the charter capital will increase to VND393.8 billion respectively and 7,500,000 shares will be issued under Employee Stock Options Plan, 2.5% increase in charter capital is equivalent to 75 billion.
In phase 2, 34,982,517 additional shares will be issued to pay 2018 dividends, the increase in charter capital will be VND 349.8 billion.
According to Dat Xanh, in 2018, it is to promote the purchase and accumulation of real estate projects, that are in a good locations, with full legal clarity and completed procedures, to prepare for the medium-term and long-term strategy of the company.
Quynh Chi